Call us now !
Send us an email
Find us on the map

of Living in a Retirement Community

Having Some Fun with Retirement Living

The idea sounded so appealing to the retired psychologist and professor and his wife, an editor and journalist: a retirement community created and run by academics, located in a canyon in the beautiful Southwest. They visited briefly, liked what they saw and decided on a big move.

So they shifted from their snowy Hudson Valley home of many years, excited to partake of a laid-back life with like-minded seniors, all drawn to what was billed as “an exclusive enclave for retired educators, connected with a university and offering amenities such as concerts and access to the university library, rather than the more commonly-associated retirement community fixtures like golf .

Then — wham! — they got there. What they hadn’t considered beforehand is the subject of Einstein Meadows: The Unspoken Perils & Thrills of Living in a Retirement Community.

“When all the educators relocated … they brought all of their old baggage full of intrigue, power grabs, endless backstabbing, insecurity and one-upmanship so prevalent in their prior work setting.” On top of that, one year after they moved in, the economy sank, and, in addition to devalued property, the amenities began to be cut. That’s when these “idealistic newcomers” started to shake things up.

All of this, and what transpired over the four years following “kind of happened” to Cold Spring’s Ned and Nancy Engel. They decided to turn it into a book. Begun as a cautionary tale, it shifted from there into something entirely different, a rollicking, playful “any resemblance to real life is highly intentional” story.

Replete with the tag line “Faced with a major loss of services, daring seniors throw caution to the wind and embrace ganjapreneurship,” the book, Einstein Meadows, contains not only plot developments swirling around the sales of medical marijuana but  a secret underground cavern and whispered asides from a certain Dr. Freud.

There’s also a Yiddish dictionary in the back pages, for easier reading.

“In life one should learn from one’s mistakes; we wrote this for fun, to entertain,” Ned says, noting that although the events in the first chapter actually happened, quite a bit of the rest of the book skirts the truth: “We made things happen in our book that we couldn’t make happen in real life,” he says.

Ned began writing, then handed it off to Nancy after a few chapters, and they back-and-forthed — amicably, according to both — all the way through. Now when they open the book, “most of the time, we can’t tell who wrote what,” they say, almost in unison.

The authors (or a pair named Ned and Nancy who seem quite similar) are the protagonists. In the last chapter, residents of the (place name slightly changed) community in “character,” provide commentary and short reviews; copies of the manuscript were provided to all of them prior to publication, and even the disgruntled seem to feel affectionately toward it.

This has been the case ever since the Engels decided to self-publish their book.  “We wrote it for the boomer population and maybe even their counter-cultural grandchildren,” Ned says. “We didn’t do it to make money, but we’re actually coming close to breaking even.” He notes “the amount of good feelings we’ve received has been overwhelming.” The couple has given two presentations in Florida, where they spend the winters — one attracted more than 80 people.

En route they hit the road with their R.V., a poster for the book in the window, then sold some copies to those whose interest was piqued. They've even bartered a copy of the book for pickles at Cold Spring Farmer's Market.

“This book is giving us so much pleasure,” says Nancy. For much of the year their main residence is in Cold Spring, in Philipstown’s Lake Valhalla community, where they’ve lived since 1982, seeking a location somewhere between New York City (where Nancy worked — she was the managing editor of Popular Photography and an associate editor at Fine Gardening) and Poughkeepsie (where Ned worked as a board-certified psychologist within the school system, and as an adjunct professor at Marist College).

The Engels are at work on a second novel, which they describe as being about epiphanies and adjusting expectations, which includes a talking Chihuahua.

Their next reading and signing is scheduled for noon to 5 p.m. on July 23 at Adair Vineyards, 52 Allhusen Road, New Paltz. Readings will take place at 1 and 3 p.m. and everyone is invited to bring a picnic. Copies of Einstein Meadows are available for $12 at einsteinmeadows.com or at The Country Goose in Cold Spring and Binnacle Books in Beacon.

The humorous and “almost autobiographical novella” is about the efforts of two New Yorkers on a mission to save Einstein Meadows, a failing Southwestern neighborhood of retired educators. Hard to leave behind their former lives as they embark on their new journeys, the academics bring along their old baggage “full of intrigue, power grabs, endless backstabbing, insecurity and one-upmanship” that was so prevalent in their prior work settings. “The characters are universal, nosy neighbors, power hungry bosses, crazy colleagues and obnoxious HOA board directors,” according to a written release from the authors.

The book is written in the first person and the authors are main characters.

“Einstein Meadows teeters on the cliff of bankruptcy soon after Ned and Nancy arrive. Together they embark on a path to create systemic change to save their foolish investment,” according to the release. “First, they encourage their neighbors to grow vegetables, herbs and flowers. Then after many heated and hilarious debates, the group embraces gangapreneurship and opens a dispensary for medicinal marijuana. Eventually the crop frees most of the seniors from mental and financial constraints.” 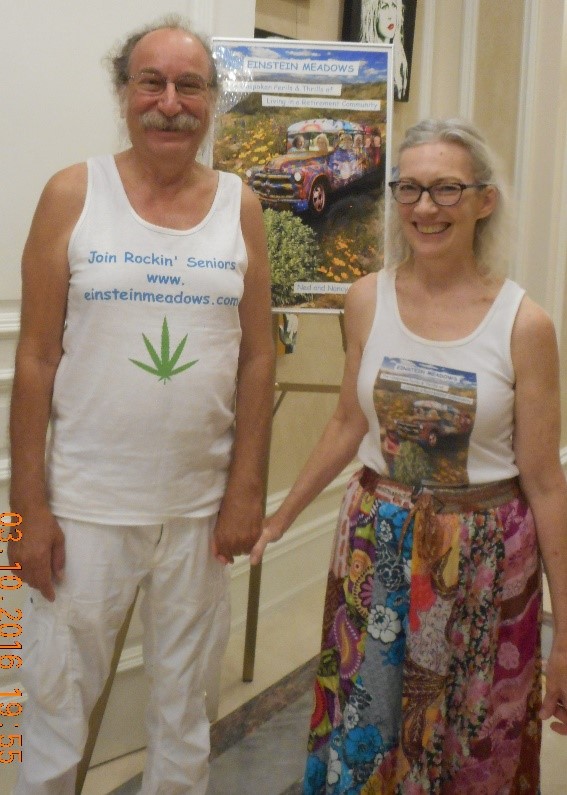 ABOUT US:
Dr. Ned Engel is a licensed board certified psychologist who has had many articles on creating systemic change published in professional periodicals. He believes in the therapeutic power of stories and has presented at conferences in the United States and Canada. He holds two doctorates, a Ph.D. and an Ed.D. The American Board of Professional Psychologists awarded Ned the Diplomate in school psychology. He is a life status member of the American Psychological Association and a fellow in the American Academy of School Psychology.
Ned served as a senior supervisor for both clinical and school psychologists. While he was teaching Master’s level school psychologists, he helped his classes create several therapeutic board games for children and adolescents.  Western Psychological Press publishes their “Solution City” and “Puzzled.” Look for the games at: www.creativetherapystore.com.
Nancy Engel has a B.S. in Journalism and has worked in publishing for more than 35 years. She was the managing editor of Popular Photography magazine and an associate editor at Fine Gardening magazine, where she wrote and edited dozens of feature articles. She wrote five chapters of The Resourceful Gardener's Guide, published by Rodale, and several hundred weekly columns for the Poughkeepsie Journal. Nancy also edited 14 gardening books, overseeing the process from recruiting authors through production and bound book. One of the first books she edited won a design award from the Garden Writers Association.
Ned and Nancy enjoy traveling around the country in their Navion IQ RV. They also like to play their guitars together, garden, canoe, hike, bike, ski, swim, practice yoga and target shoot. Ned has always been a wonderful storyteller.
******
We welcome the opportunity to meet our readers in person, autograph their copies and read parts of our book. Please ask the director of your community activity center if they would like to have us as guest speakers. We would also be happy to present to book club members, congregations, cannabis culture establishments, residents of RV parks, and members of naturist clubs (it's always fun to read the book in the buff). Our goal is to create a nationwide movement of seniors having a rollicking good time. We look forward to meeting you!
Email us at: createmiracles@einsteinmeadows.com